We’re excited to bring you a little something different on the blog today!  Shahrzad & Justin are an RVA couple who decided to pack up their guests and their photographer and head out to Las Vegas for a spectacular wedding!  Their love story started in Richmond, but as they dove further and further into planning an RVA wedding, they realized that a VEGAS wedding had always been their dream.

Shahrzad says, “In the spring of 2010, we met in the Museum District of Richmond. We were in school at VCU — I was just starting my first year of Dental School and Justin had just retired from the Dodgers and was finishing his degree. I actually approached him first. We were playing in the River City Dodgeball League, and I had heard a story of how some former baseball player had hit a girl in the face with a dodgeball, so when I walked over to him, my pick up line was, ‘So are you the guy who hit the girl in the face with the dodgeball!?’ And the rest is history.” 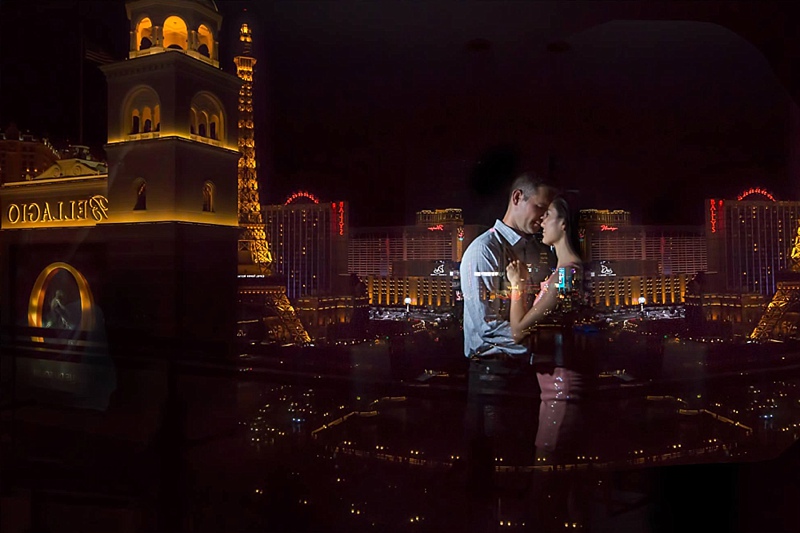 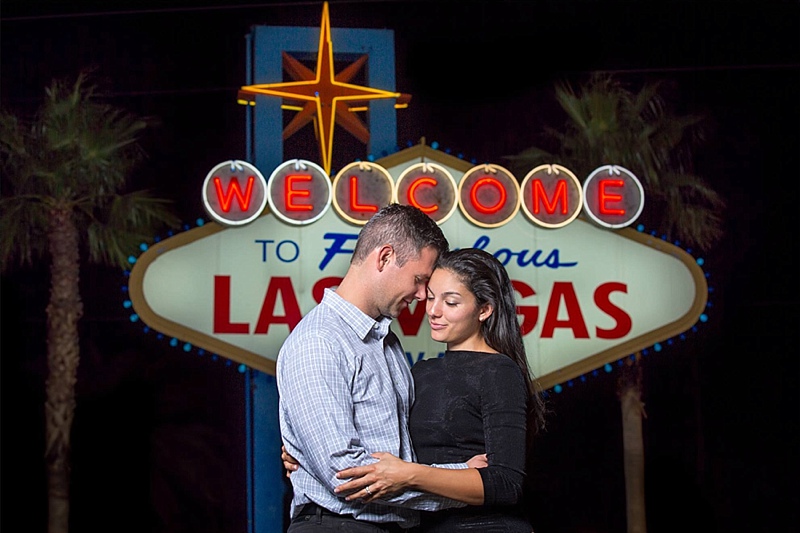 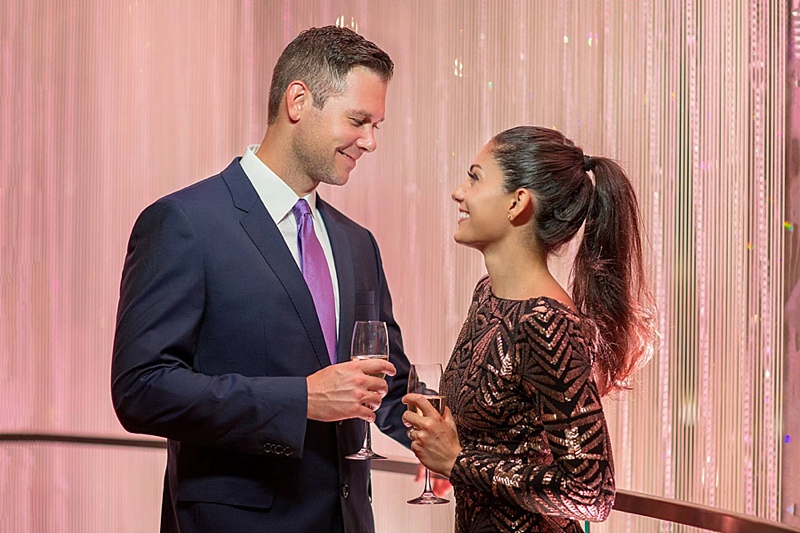 “It was October 2013, a Sunday afternoon in Byrd Park near the lake close to Maymont. We decided to go for a picnic since it was a warm, sunny day. We just happened to pick a spot in the middle of a frisbee golf tournament, but we made the most of it anyways. We had been reading The Five Love Languages, so at some point during the picnic, I began to read aloud from the book. As I started to read a passage under the ‘receiving gifts’ chapter, it ironically was talking about the symbol of a ring in a relationship for one whose love language is receiving gifts (that is totally my love language). I continued to read, and I thought Justin was still sitting next to me, but when I looked up he was on one knee with a ring in hand. I said, ‘Is this really happening?!’ like 20 times — I blacked out I think!  He asked me to marry him, I cried of course, and our engagement began.”

Justin likes to point out that they had been  reading the book together and that just happened to be where we were in the book.  He didn’t read ahead! 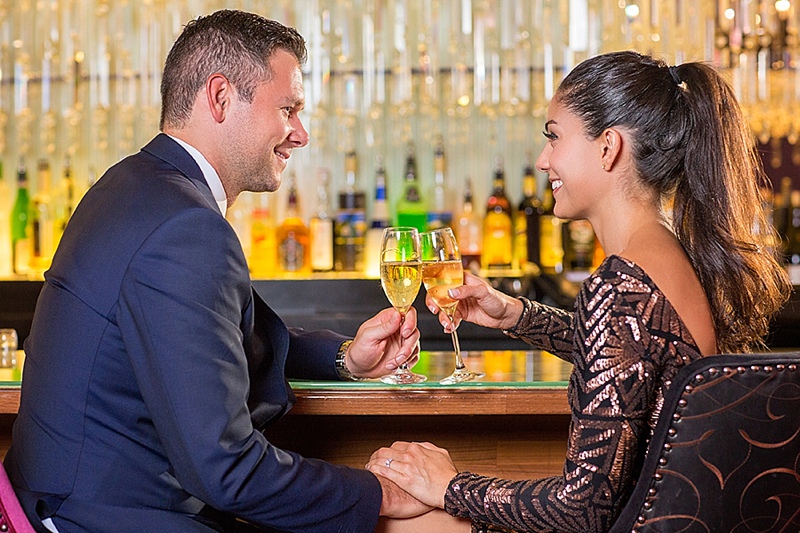 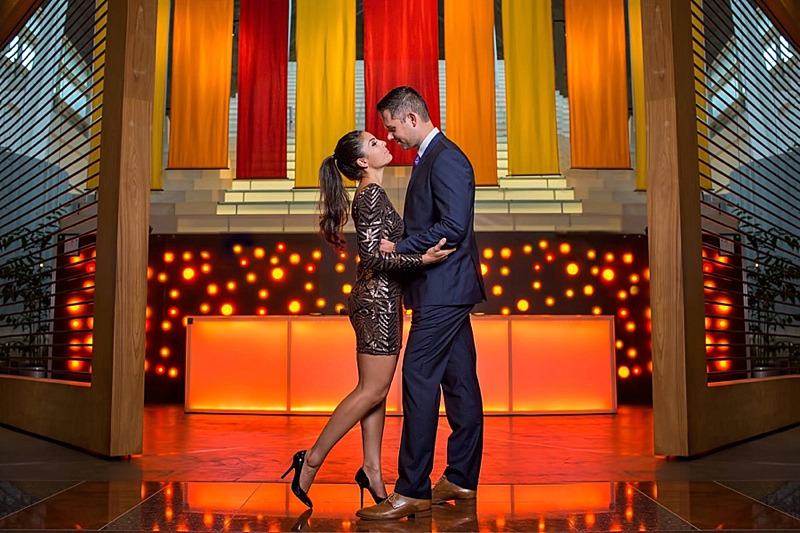 Shahrzad tells us, “We originally planned to be married in Richmond. Our ceremony was to be held at the Main Street Train Station with our reception to follow at Havana 59. As we dove further and further into the plans, with maybe an argument or two, we realized we always spoke of being married in Las Vegas, so we decided to make it happen. We chose  The Chandelier Room in the Cosmopolitan Hotel for the  rehearsal rendezvous, held the ceremony at the chapel in Planet Hollywood and reception in our panorama suite at the Planet Hollywood. 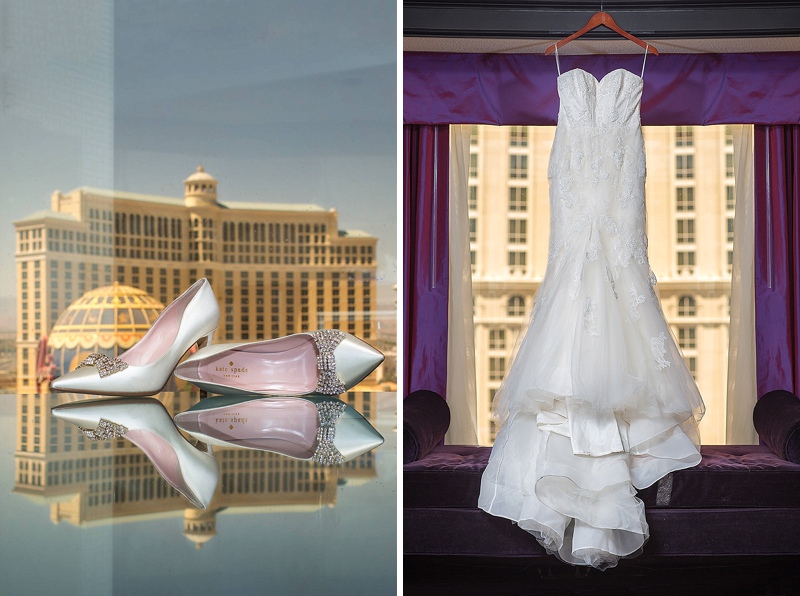 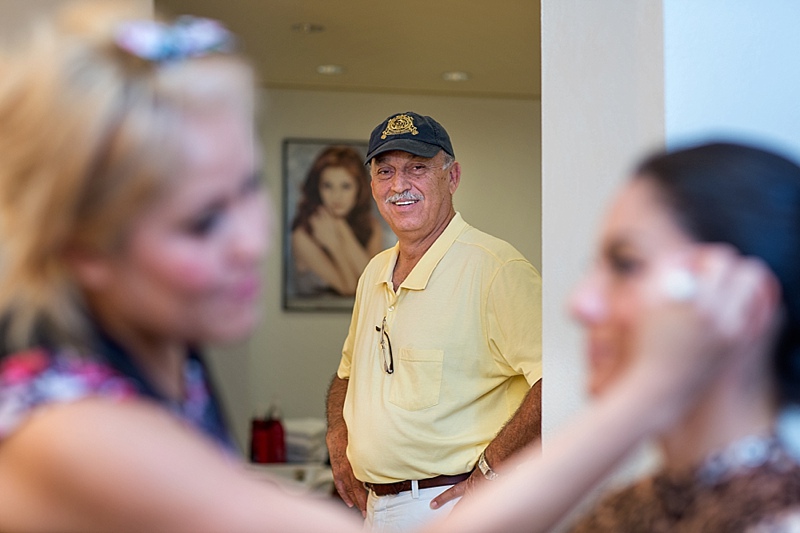 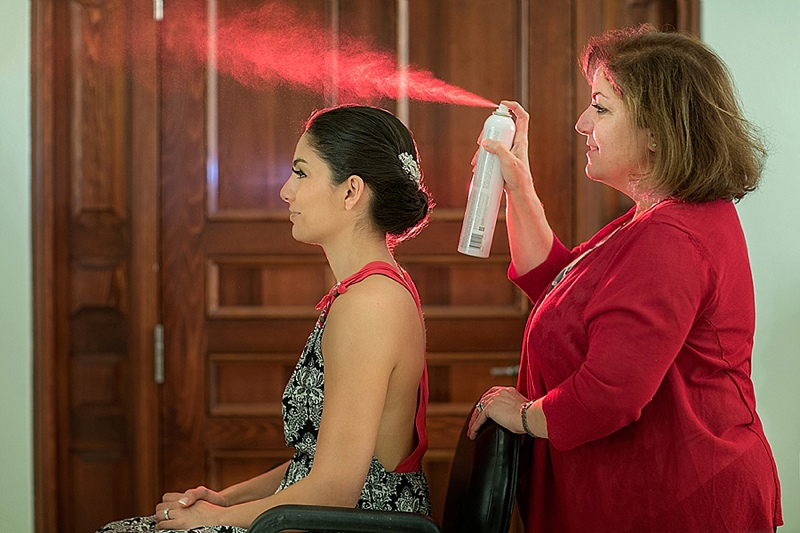 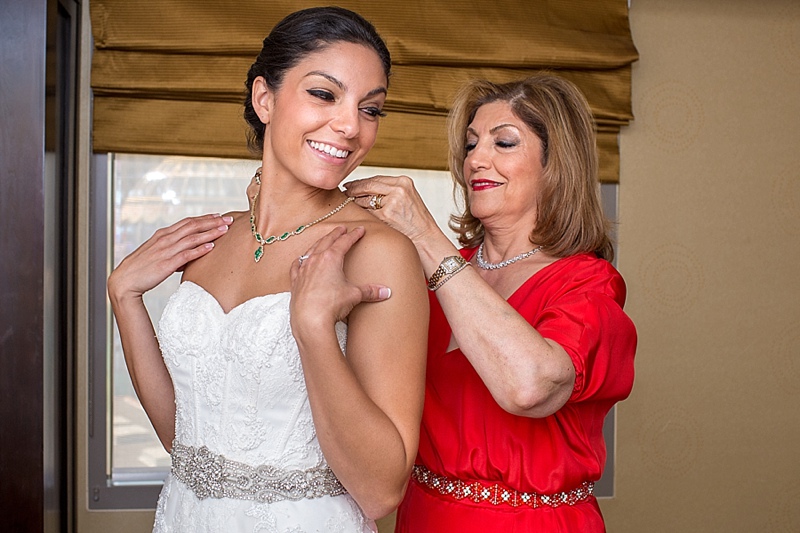 These next few images may be the sweetest we’ve ever seen! 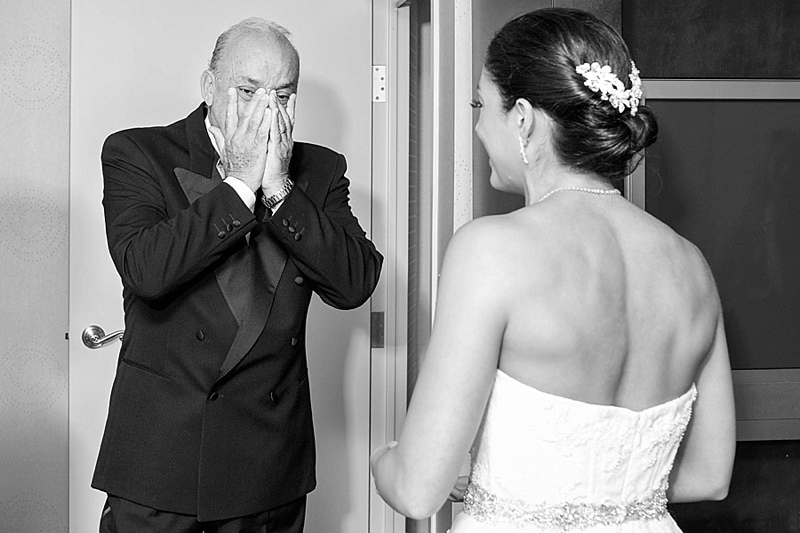 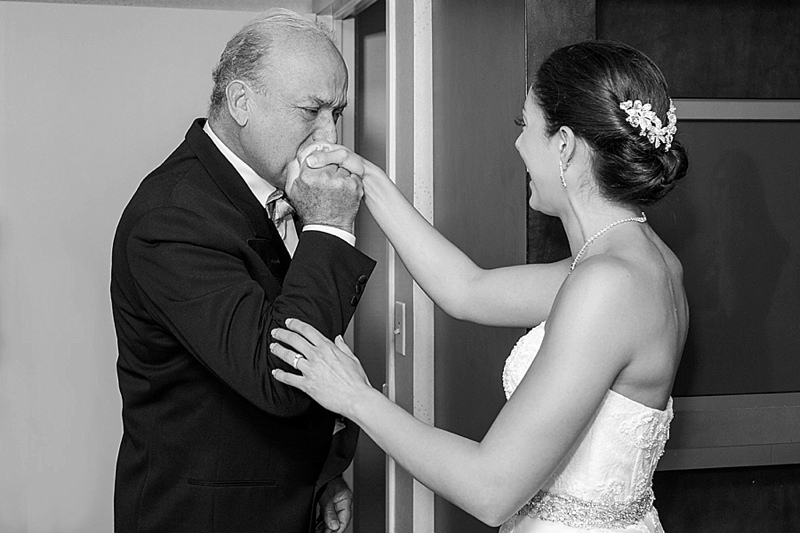 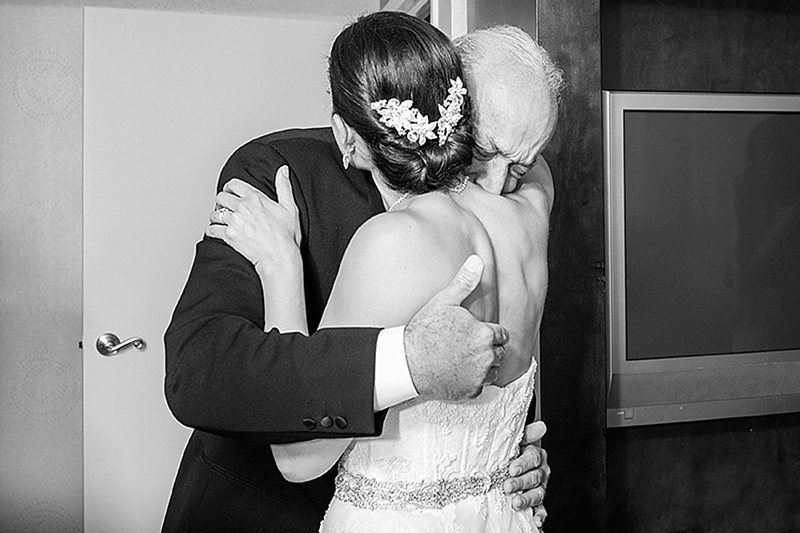 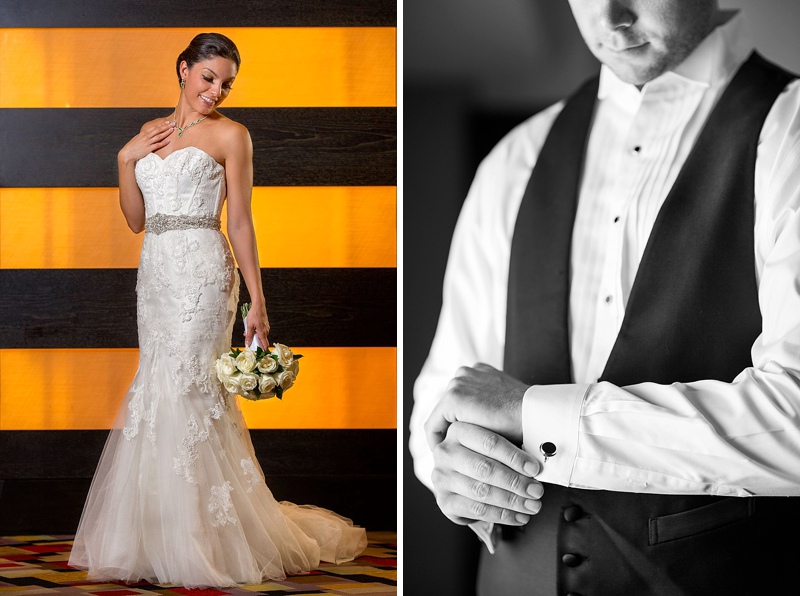 “We did everything white because Las Vegas is so colorful and bright. Justin loves Frank Sinatra, so he and his groomsmen looked dapper like the Rat Pack.” 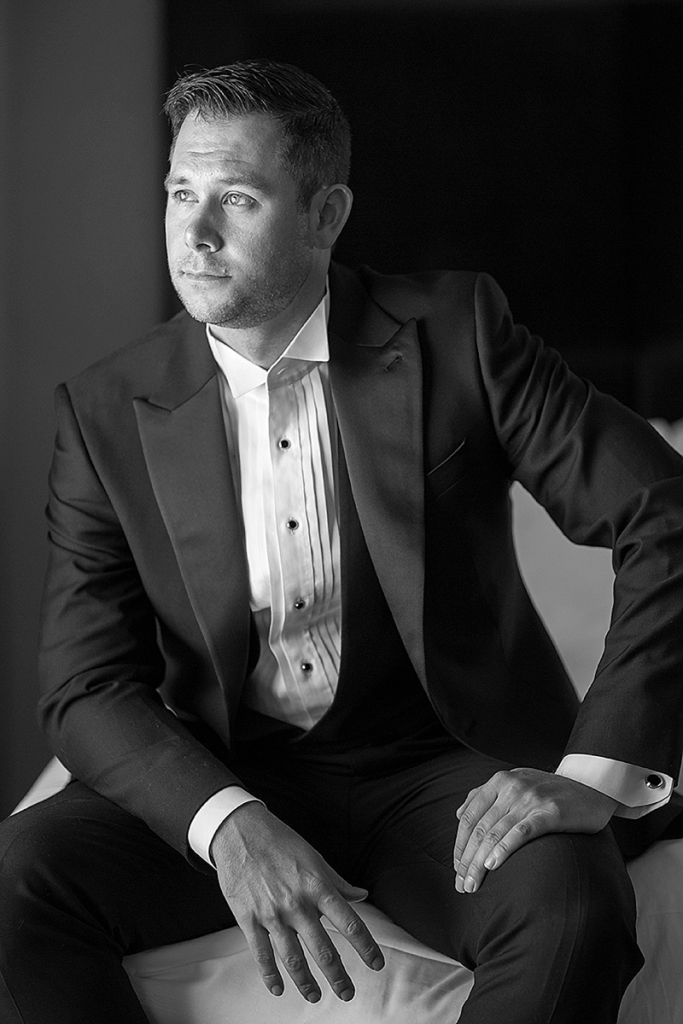 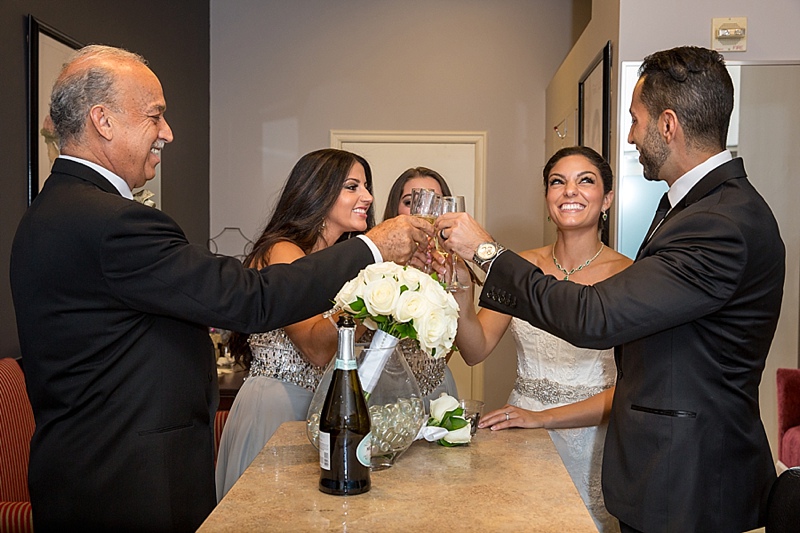 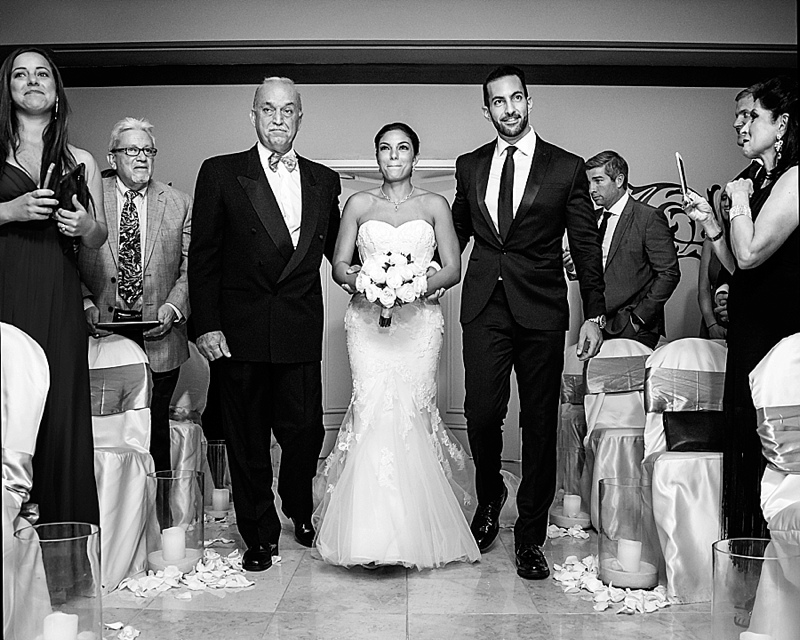 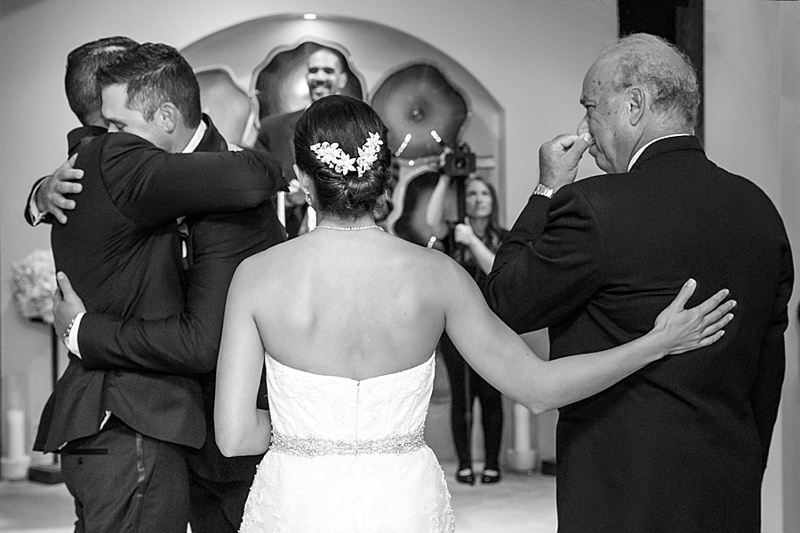 No Elvis impersonators are required when you get married in Las Vegas! 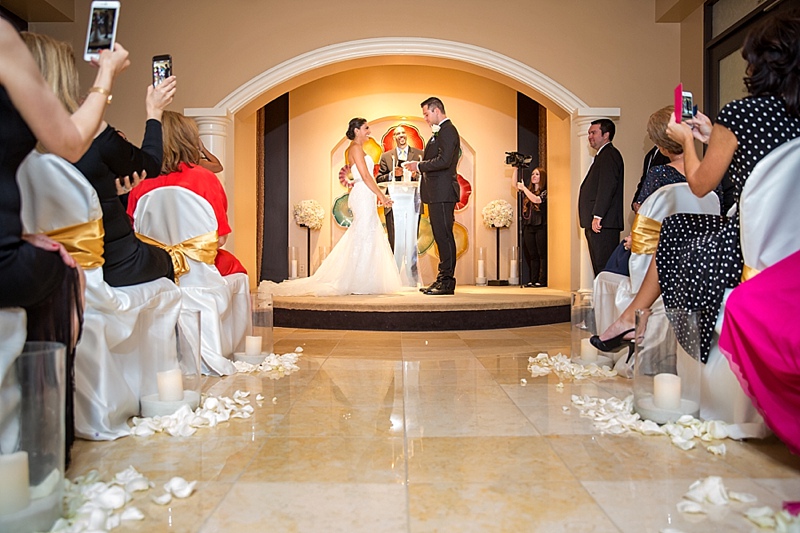 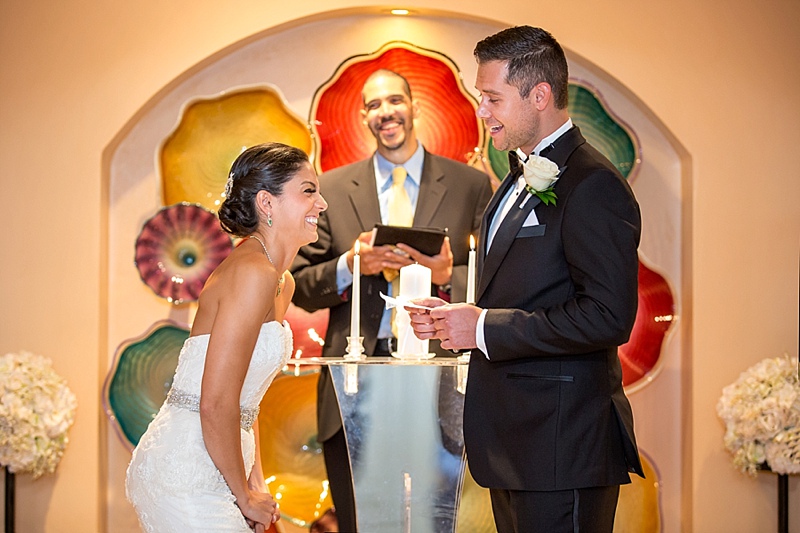 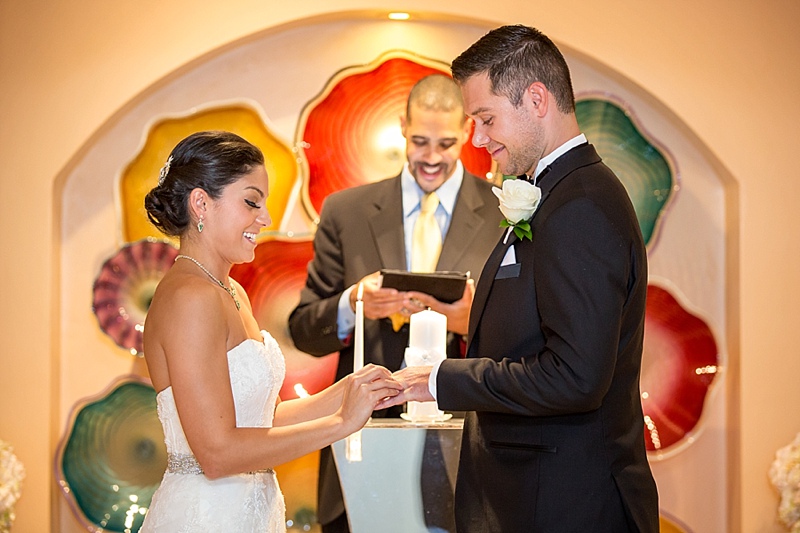 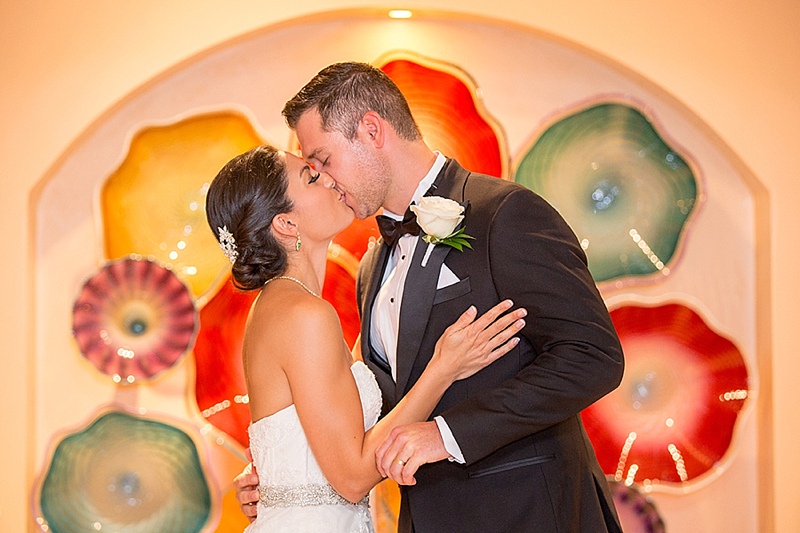 Which part of your wedding did you want to WOW your guests?

“The rehearsal dinner at the Chandelier Room or Sean Dewitt getting the group photo in front of the Bellagio fountains, he is AMAZING!

Since we had planned on having the wedding in Richmond, I knew I wanted Sean Dewitt as my photographer. We were on a budget, but I told Justin  that I am ok with splurging on the photos because they last forever. So we had booked Sean for our Richmond wedding, and it was after we had signed with him that we changed our location.  We contacted him and let him know why we were changing things up and heading to Las Vegas.  We didn’t even think it was an option that he could go! He replied that he was ready to go with us!

Had Sean not let us know that it was an option of him being able to go to Vegas, we wouldn’t have had our wonderful photos!” 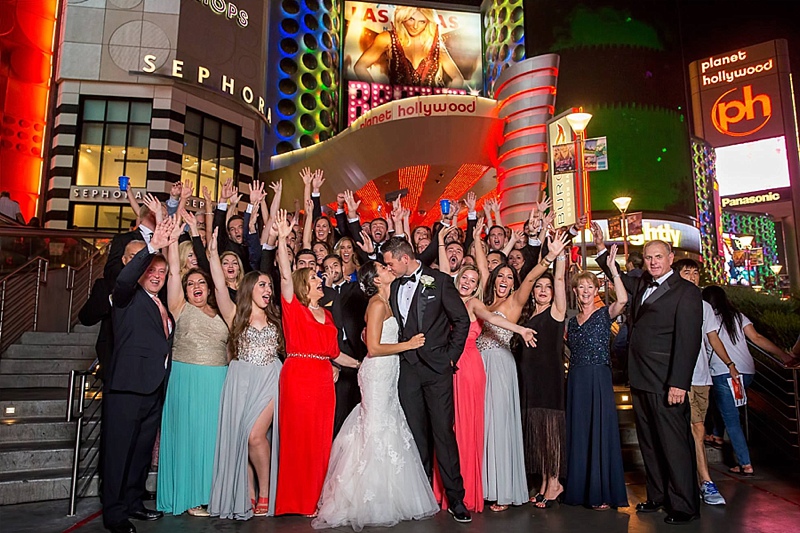 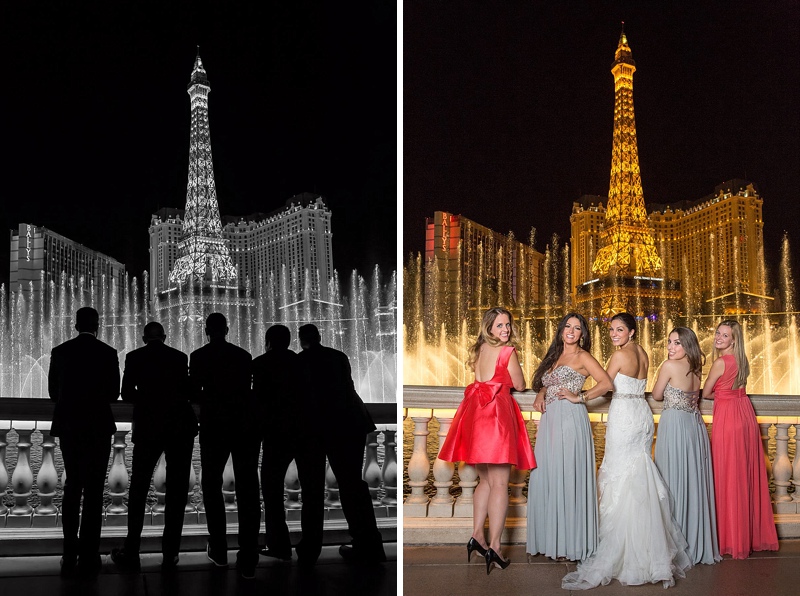 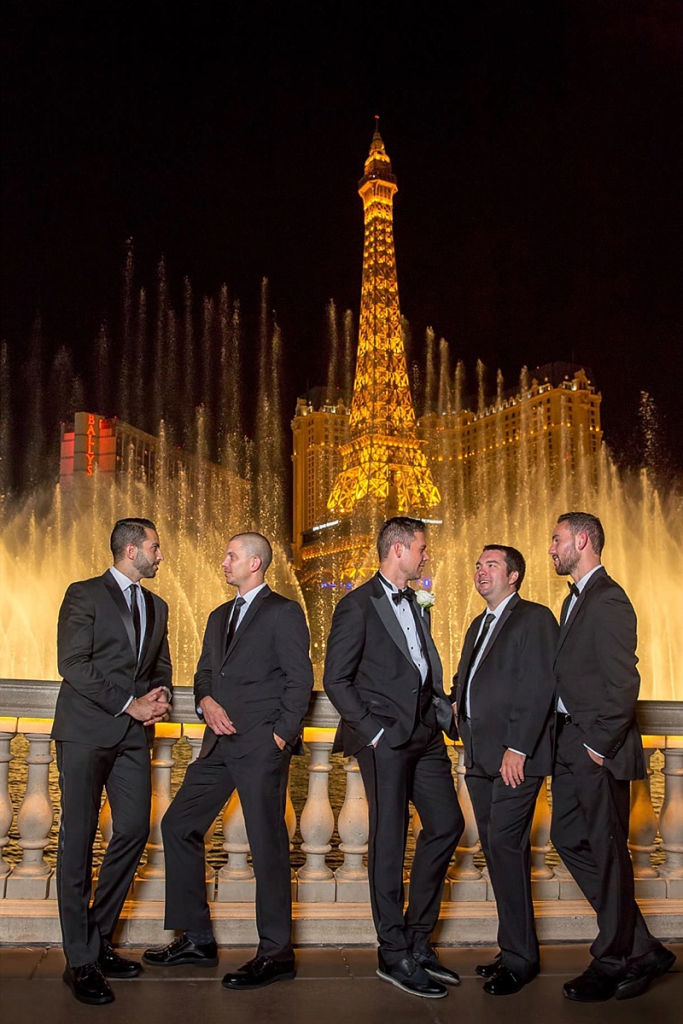 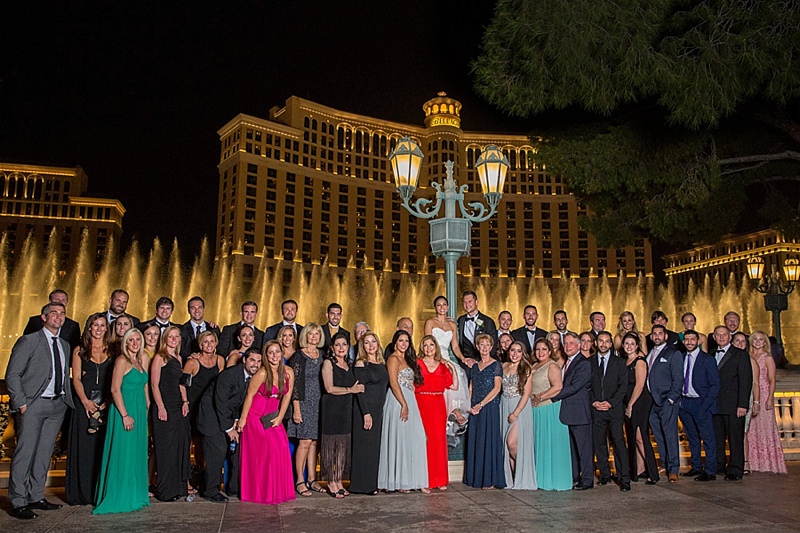 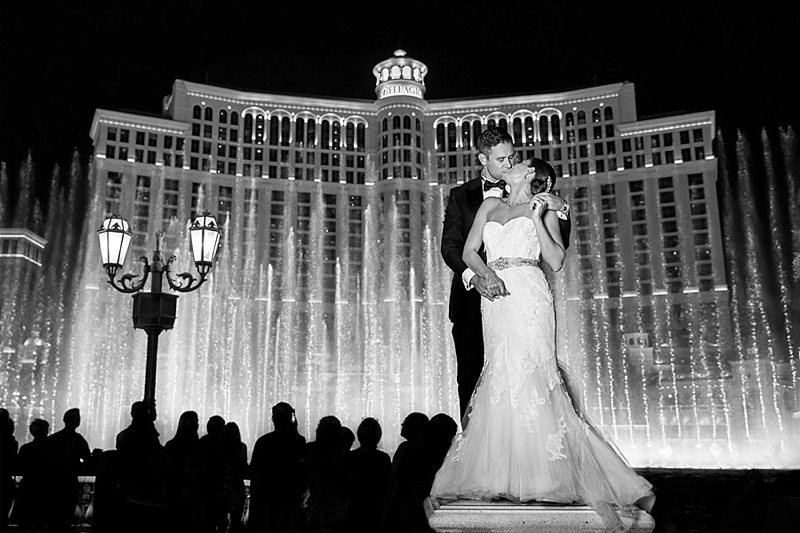 What was your absolute favorite part of the day?

“When we finally saw each other at the chapel when those doors opened!” 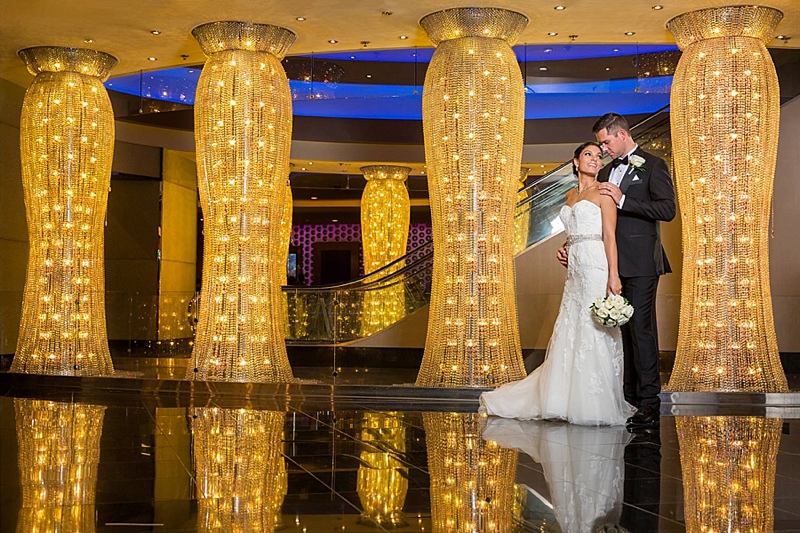 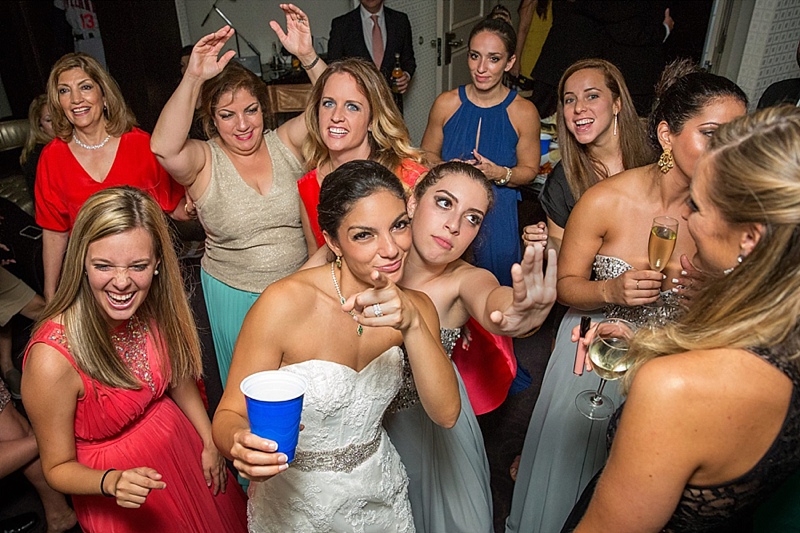 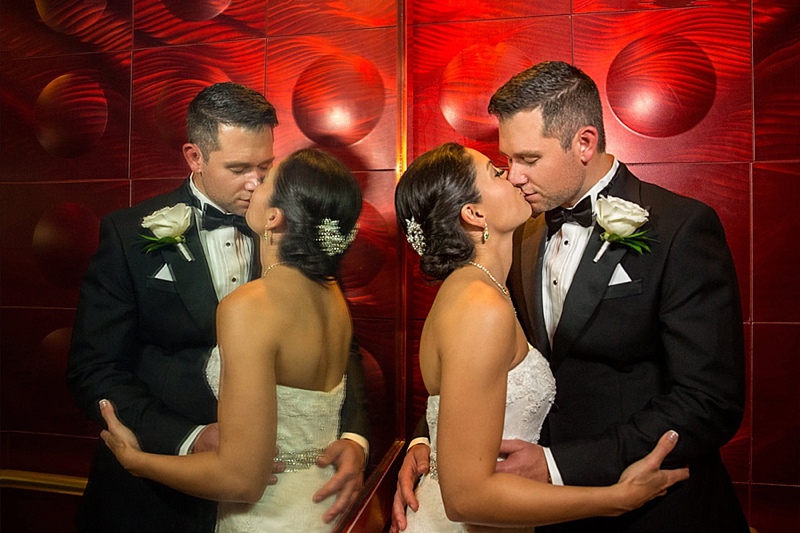 Rehearsal Rendezvous: The Chandelier Room at The Cosmopolitan Hotel