After meeting on Match.com and having their first date here in Richmond, Aíne and Dustin were inseparable. When it came time to propose, Dustin pulled out all of the stops for his book-loving bride-to-be. He ordered a 1920’s engagement ring and a hollowed out copy of Gone With the Wind and coordinated with Chop Suey Books, Aíne’s favorite bookstore, for a surprise proposal. 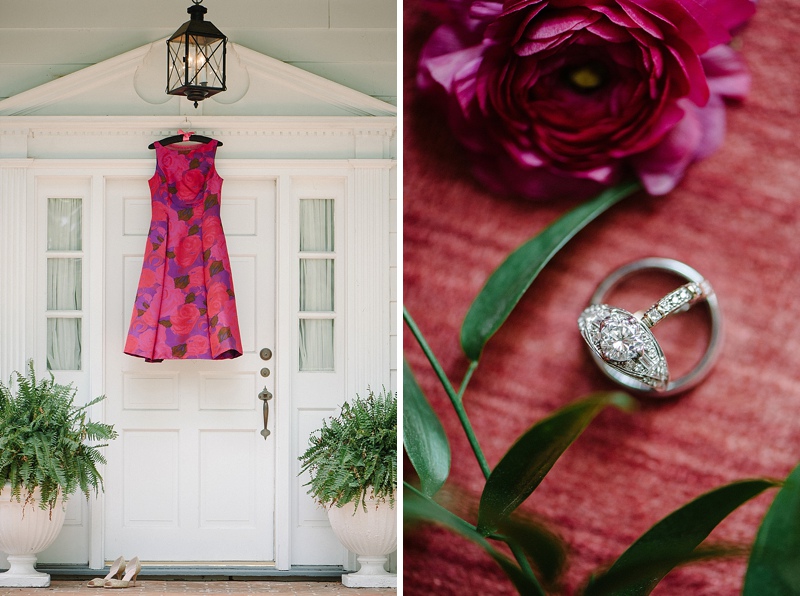 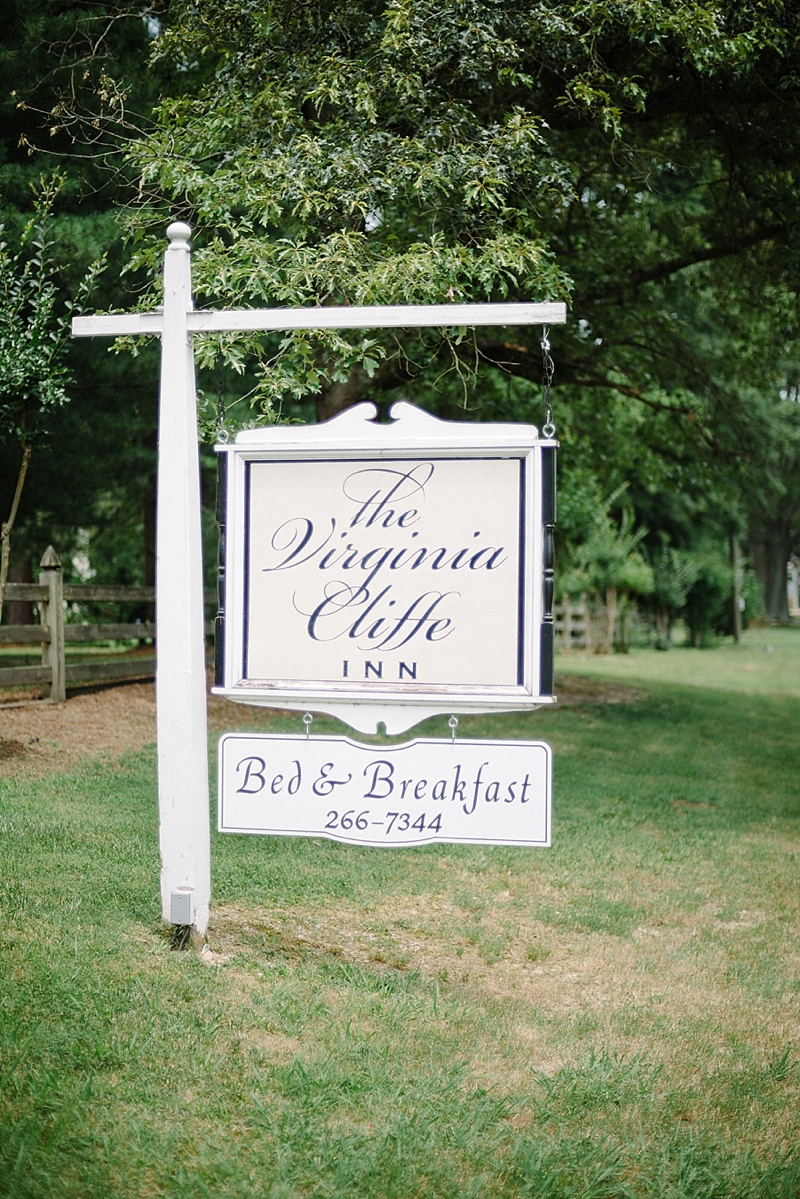 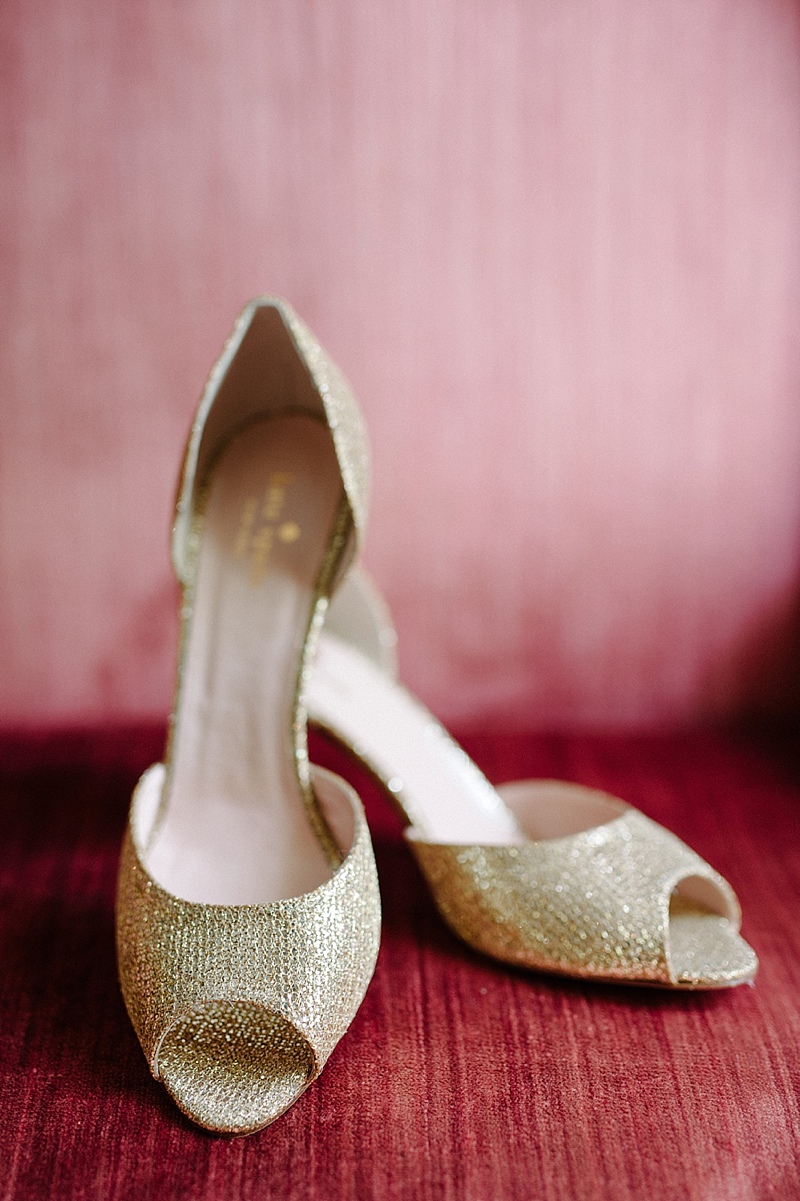 The bride also designed and put together all of the paper goods for the wedding day, something she found to be the most fun part. 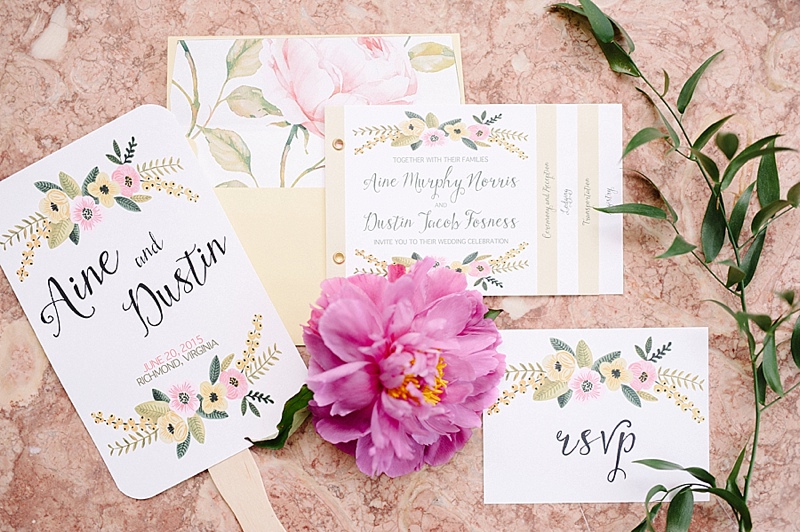 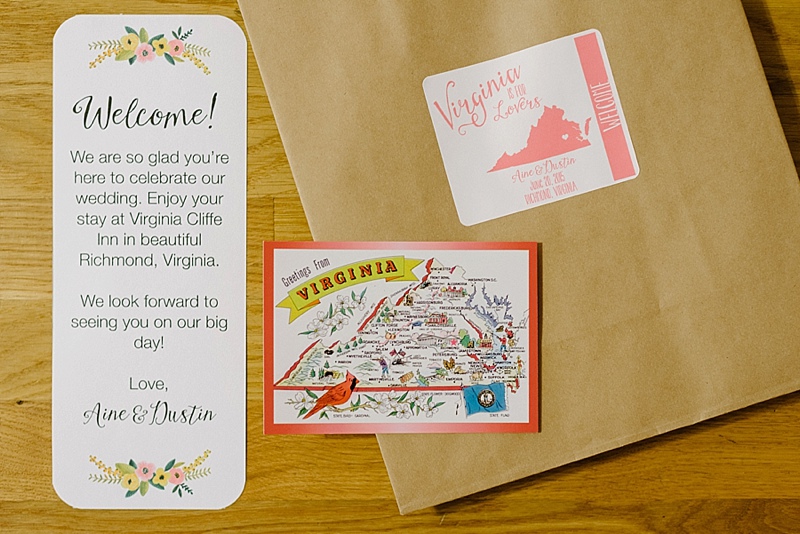 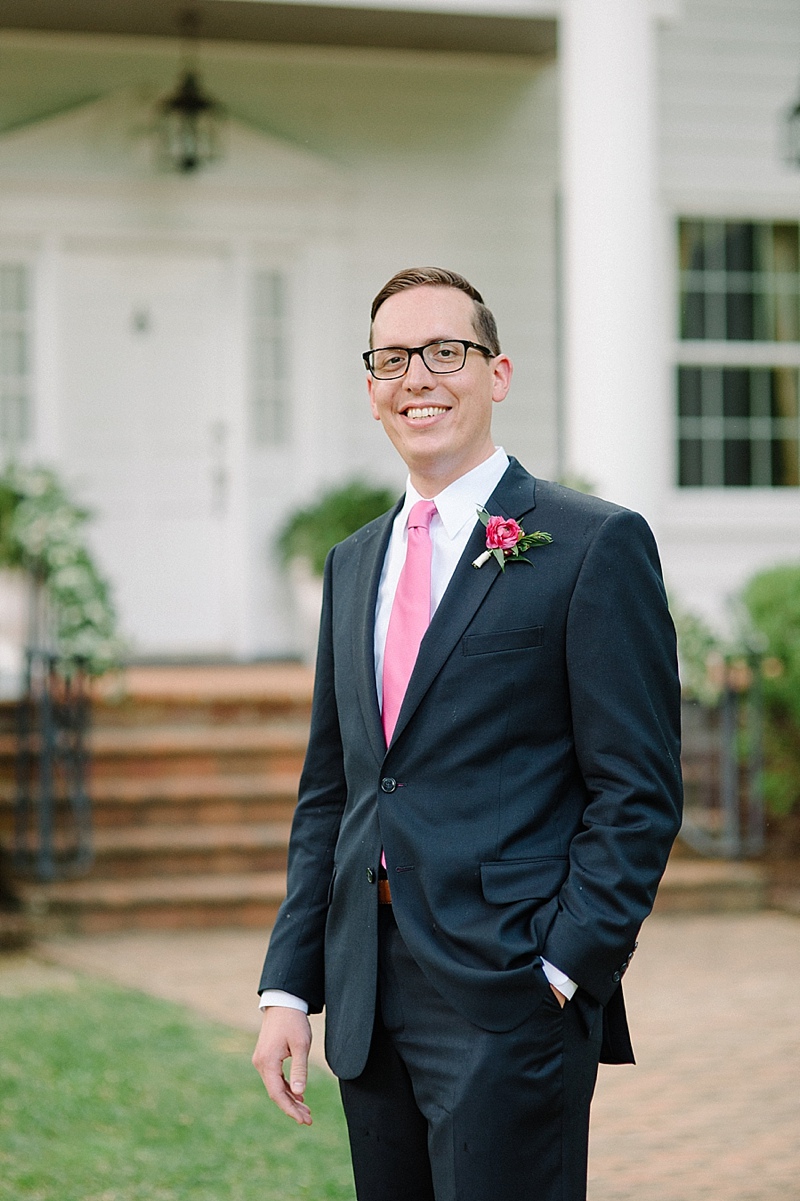 The two exchanged sentimental gifts (delivered by friends!) before their ceremony.  Aíne sent Dustin a first of John Updike’s Marry Me and a vintage watch engraved with “You are my once upon a time.” 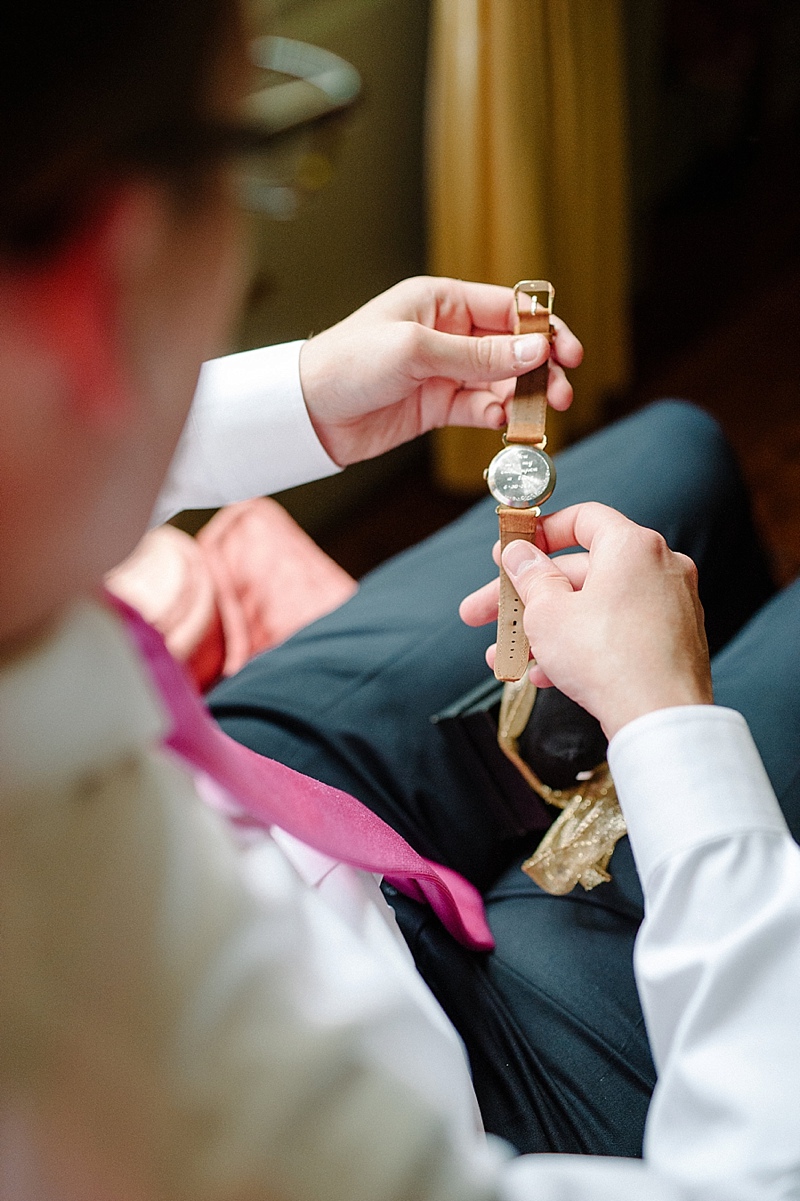 Aíne & Dustin chose The Virginia Cliffe Inn for its classic southern feel and the convenience of having the ceremony and reception at the same place. 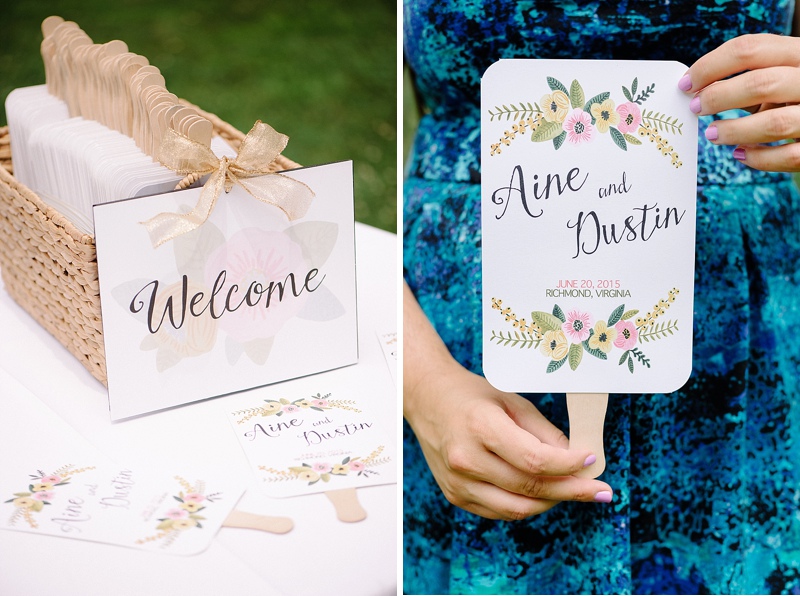 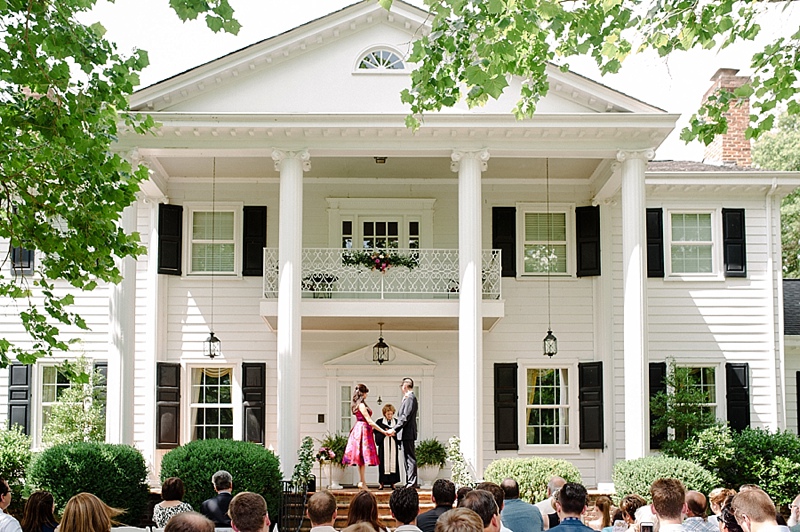 To personalize their ceremony, Aíne & Dustin had two friends read from Walt Whitman and Mark Twain, as well as an Irish blessing. 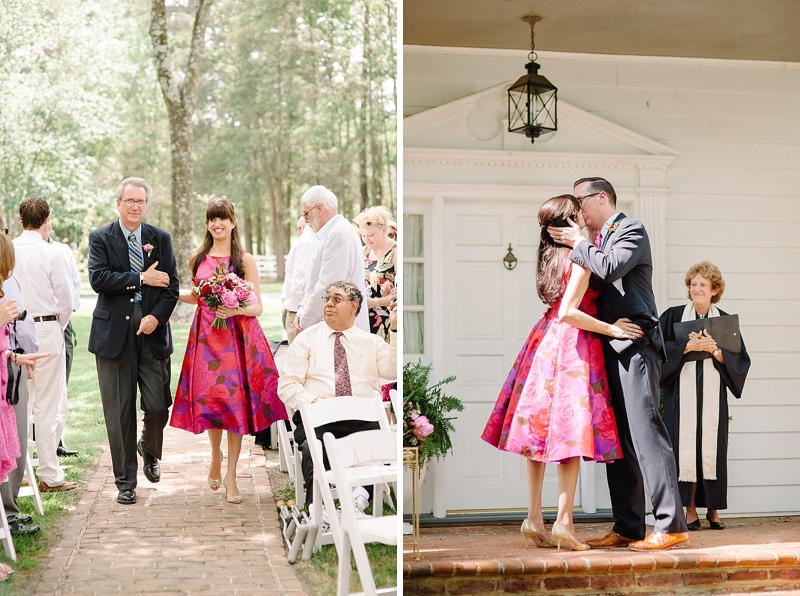 It was important to Aíne & Dustin that their guests, who came from Ireland, London, Minnesota, Alaska and beyond, be comfortable on their hot June wedding day. They provided gold buckets of sunscreen, bug spray and handmade fans. 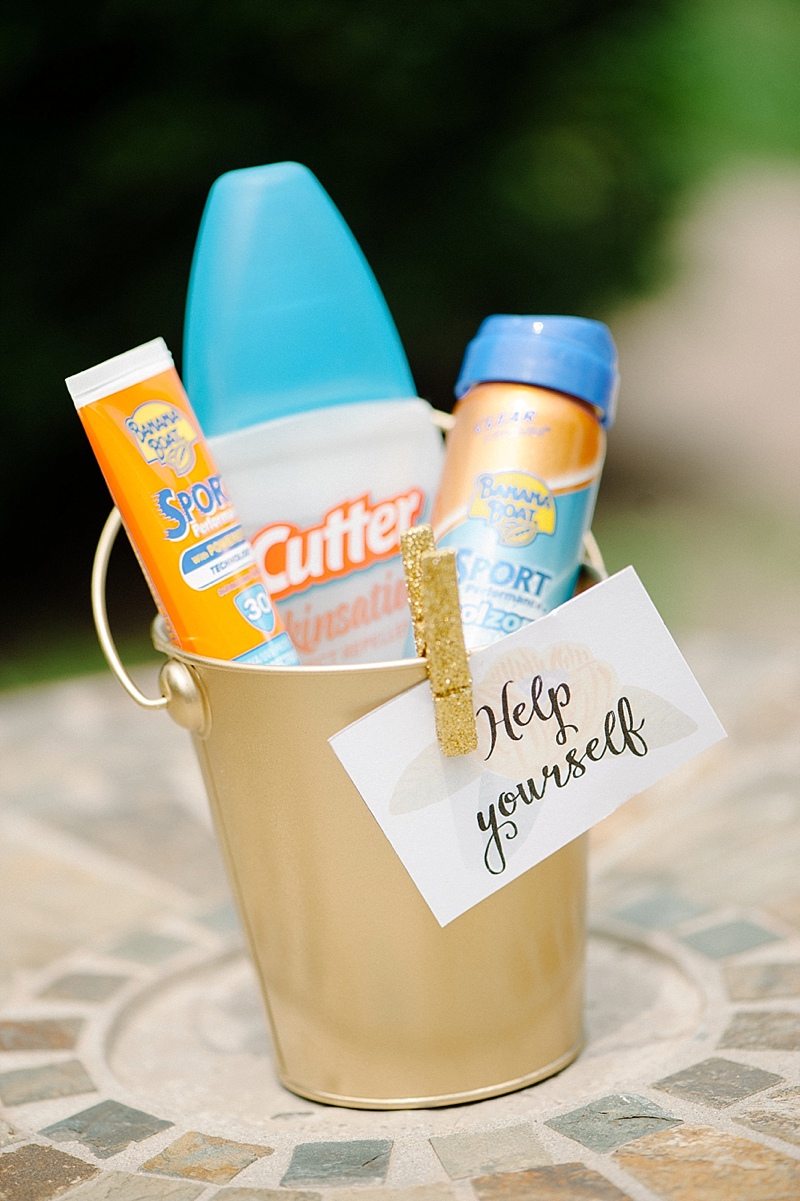 To make sure none of their friends felt left out and give their wedding a more intimate feel, the couple decided to skip a bridal party.  Instead, they had two good friends give speeches during the reception.   Aíne says, “We both had ample support throughout the wedding process just as we would have with a bridal party.” 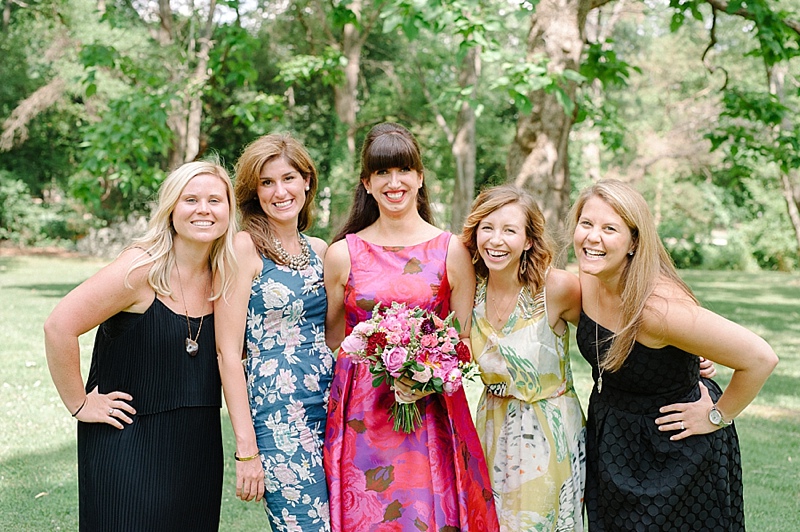 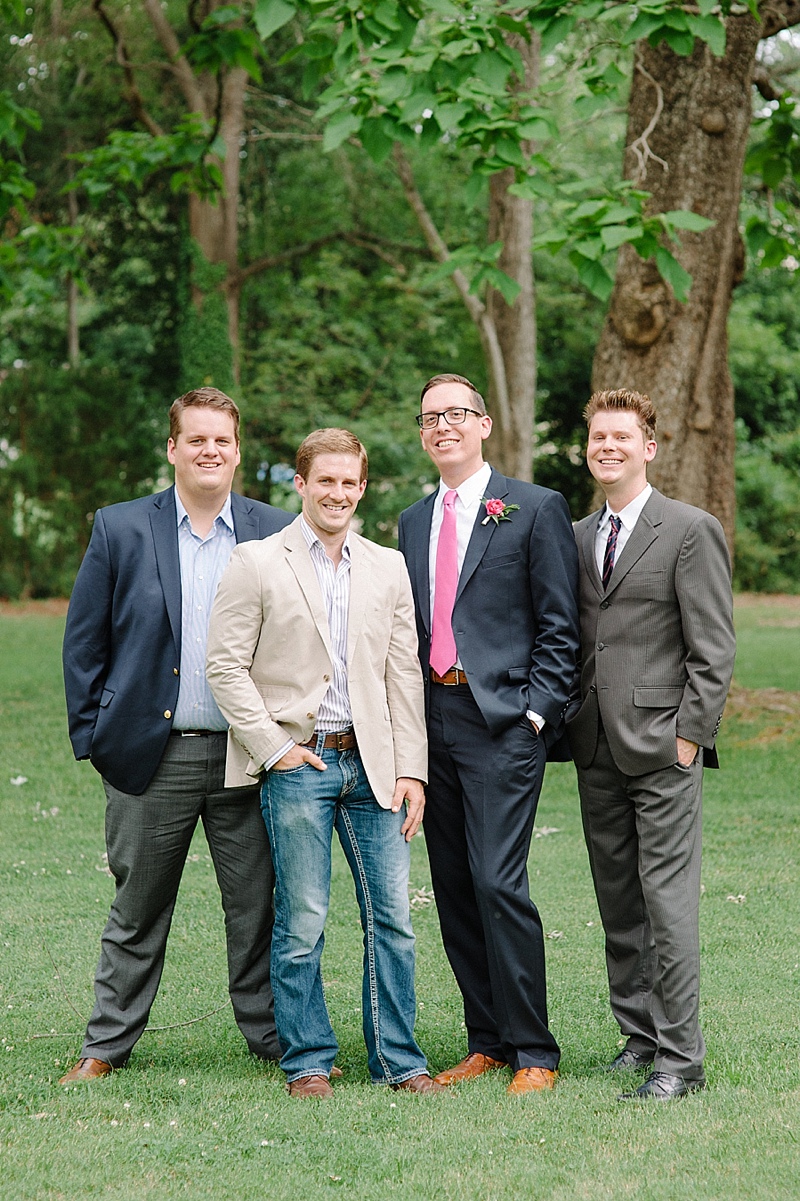 Their color palette, which was executed to perfection by floral designer Amanda Burnette, was inspired by Aíne’s fuchsia, tea length floral dress by Adrianna Pappell. It was, as Aíne says, unconventional, but exactly what she wanted.  She says, “I just wasn’t comfortable in a big white dress.  It’s not me!” 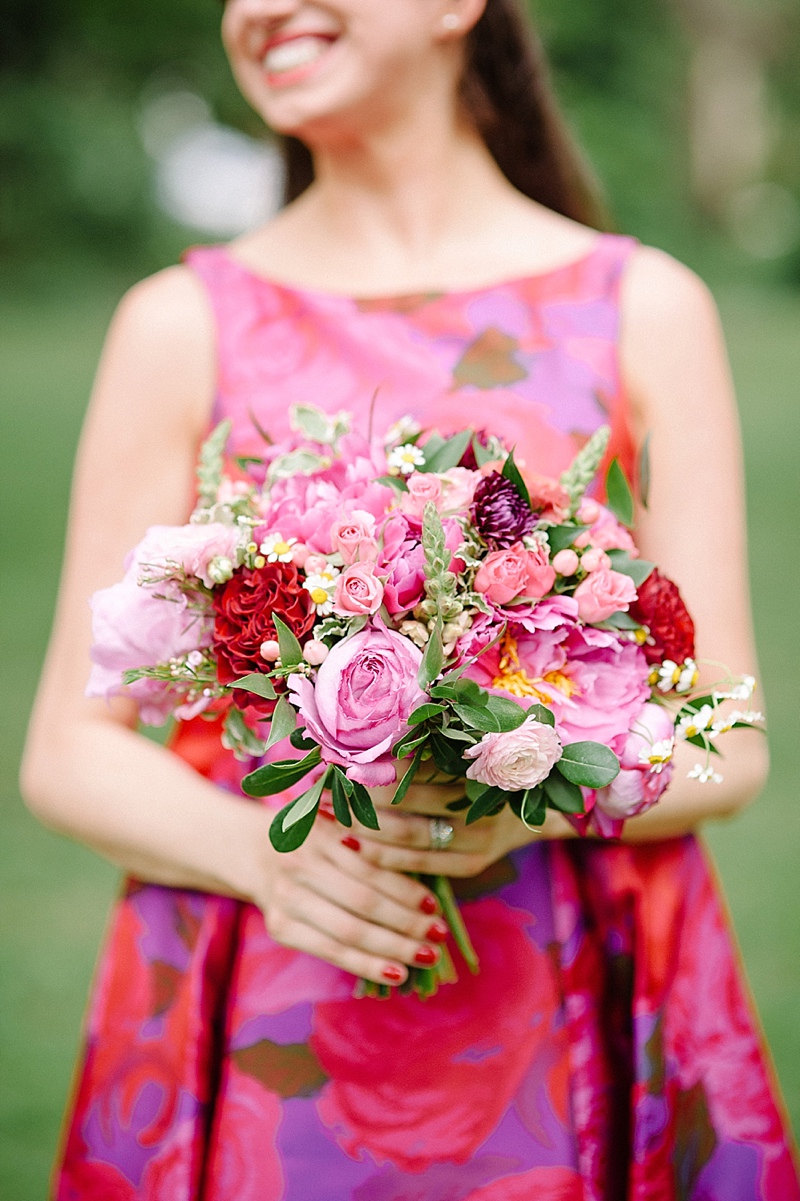 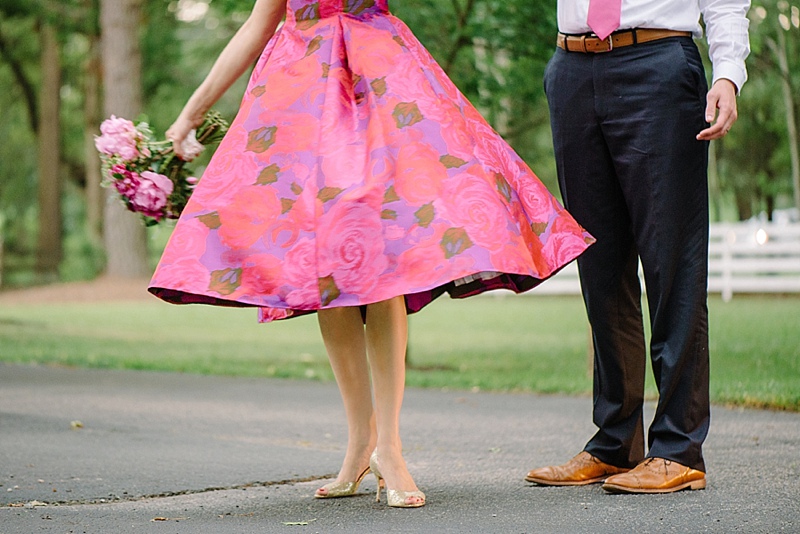 The bride tells us, “It has a wonderful, southern vintage feel, like you’re stepping back in time.  We specifically sought a venue where the ceremony and reception could be in the same place, and Virginia Cliffe Inn offered everything we needed and more.  Its ceremony spot on the front steps between the columns is beautiful, and the reception area in the back of the house was spacious and picturesque.” 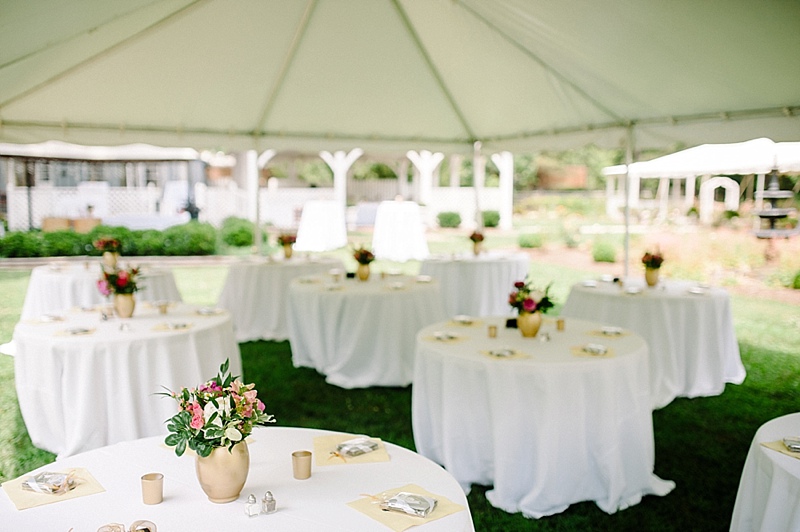 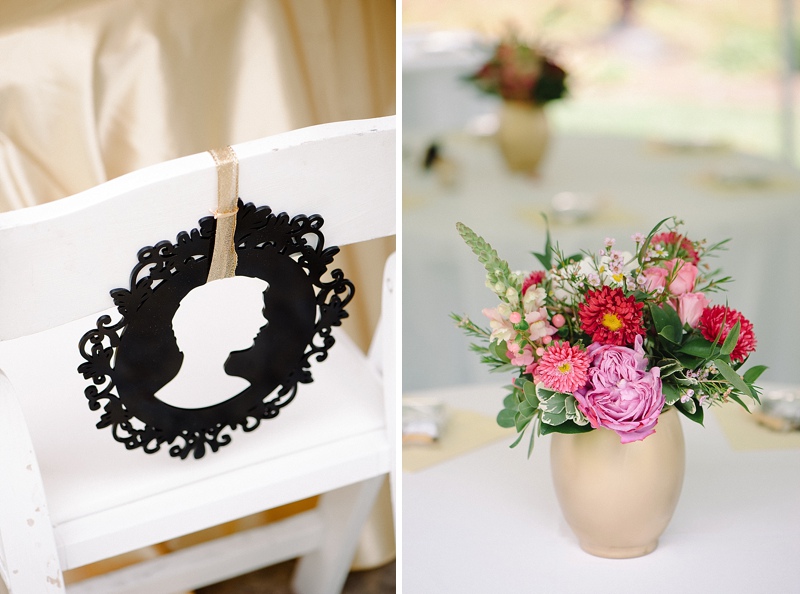 The couple chose “I Can Hear Music” by the Beach Boys for their first dance song.  It was important to Aíne and Dustin that their music be timeless AND fun, so you heard everything from She & Him to Motley Crue! 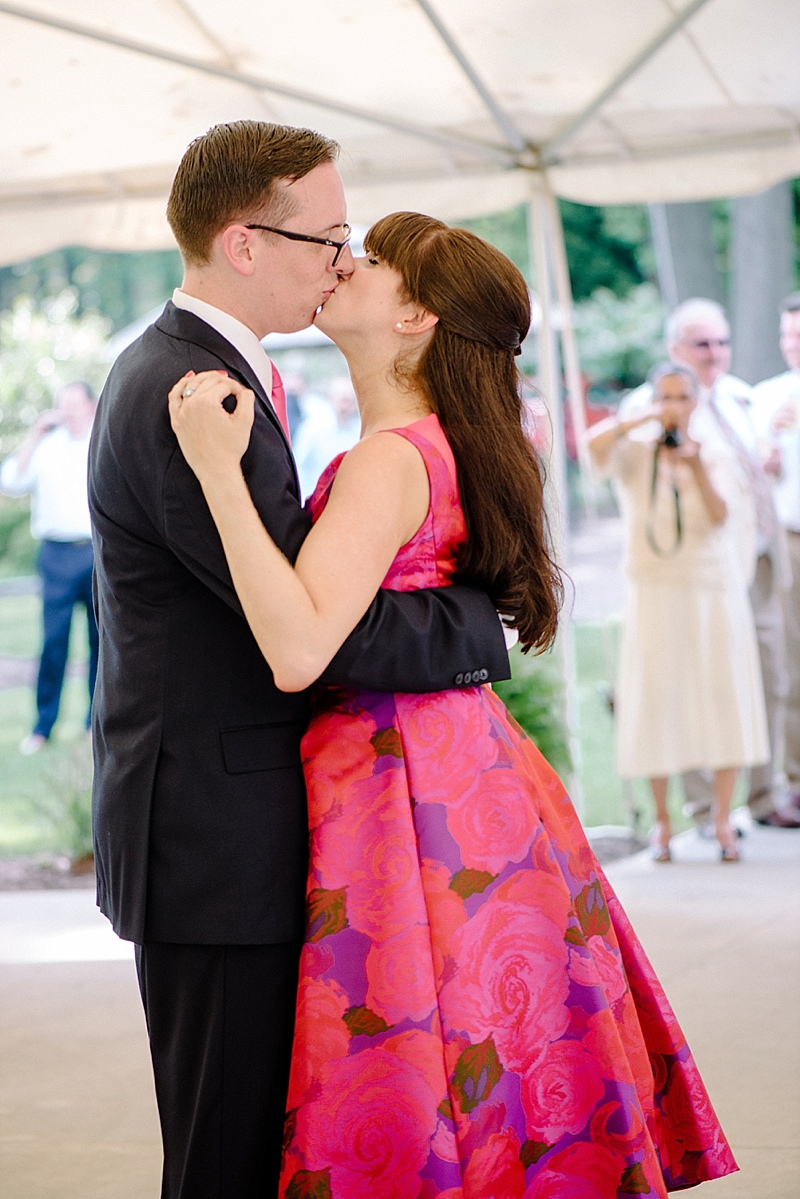 Aíne surprised Dustin with a Minnesota Vikings groom’s cake with a fun cake topper to reflect his Minnesota roots!  The two chose Buz & Ned’s to cater because, as Aíne tells us, “It’s the best!” 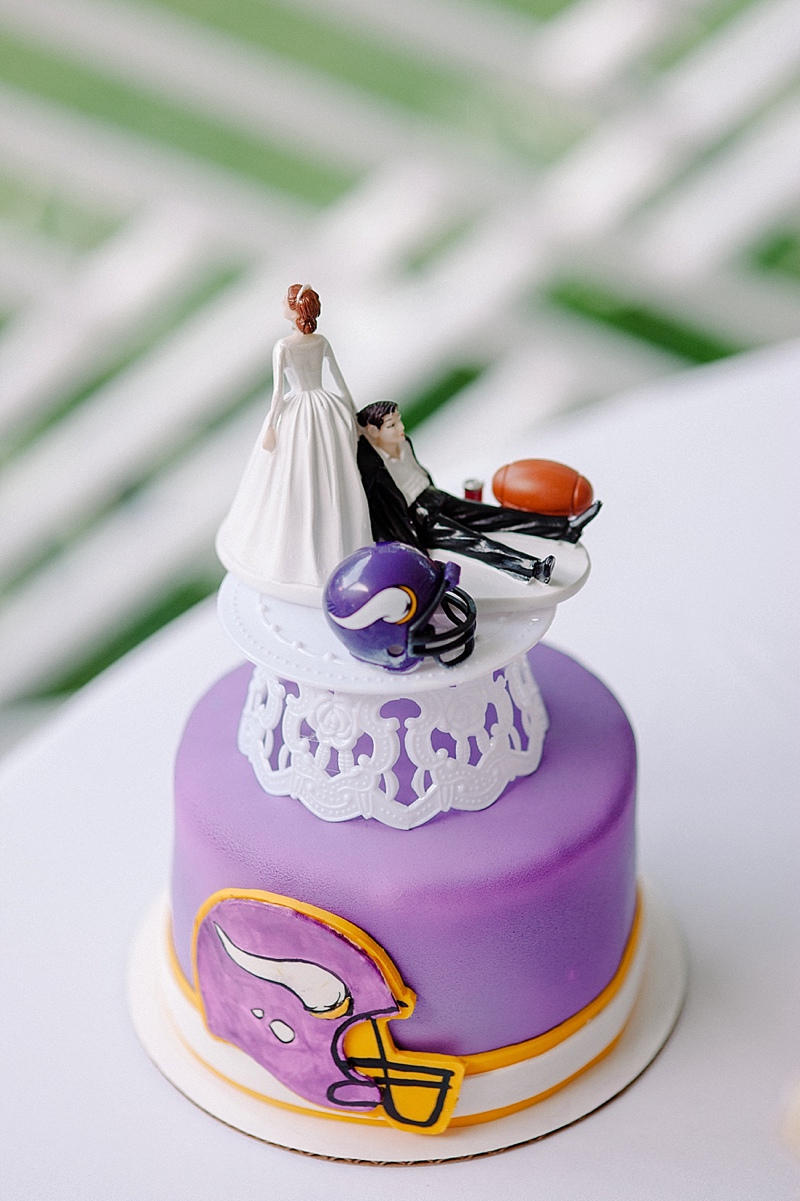 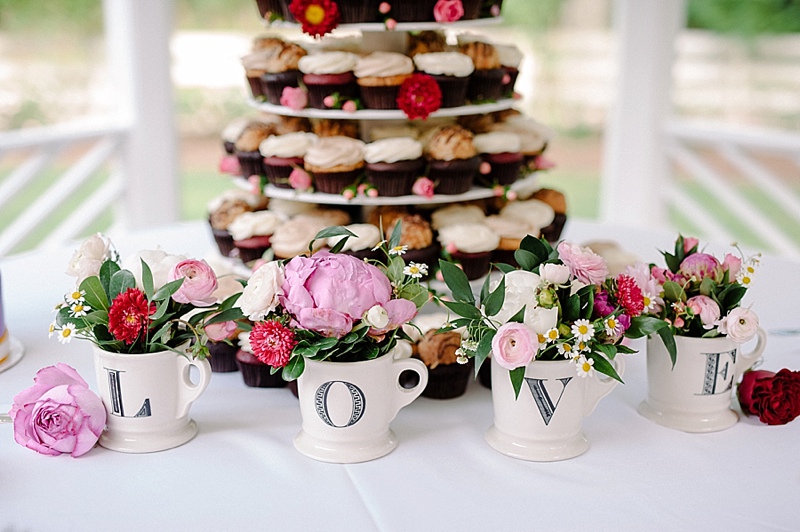 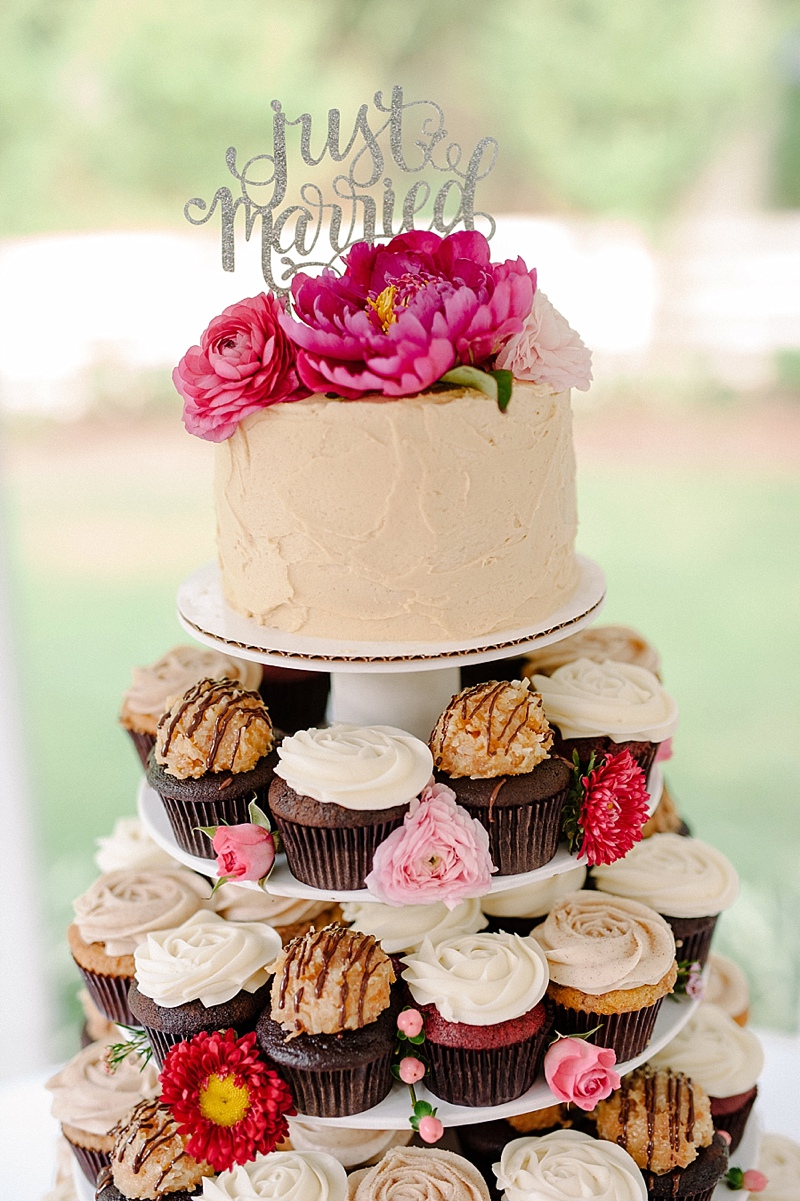 Guests left that evening with plenty of memories and bookmark/library card themed favors. 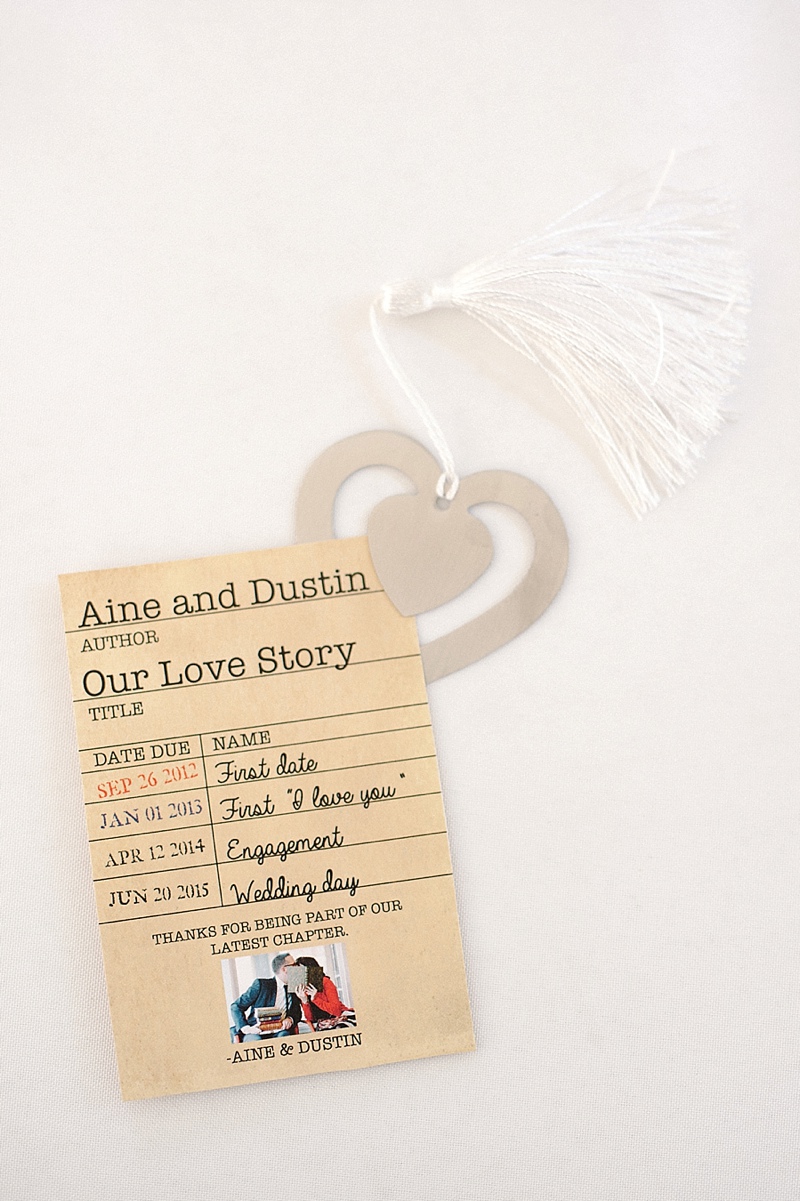 At the end of the evening, after a night of dancing under a tent, Aíne and Dustin rode away in a gorgeous 1950’s Bentley. 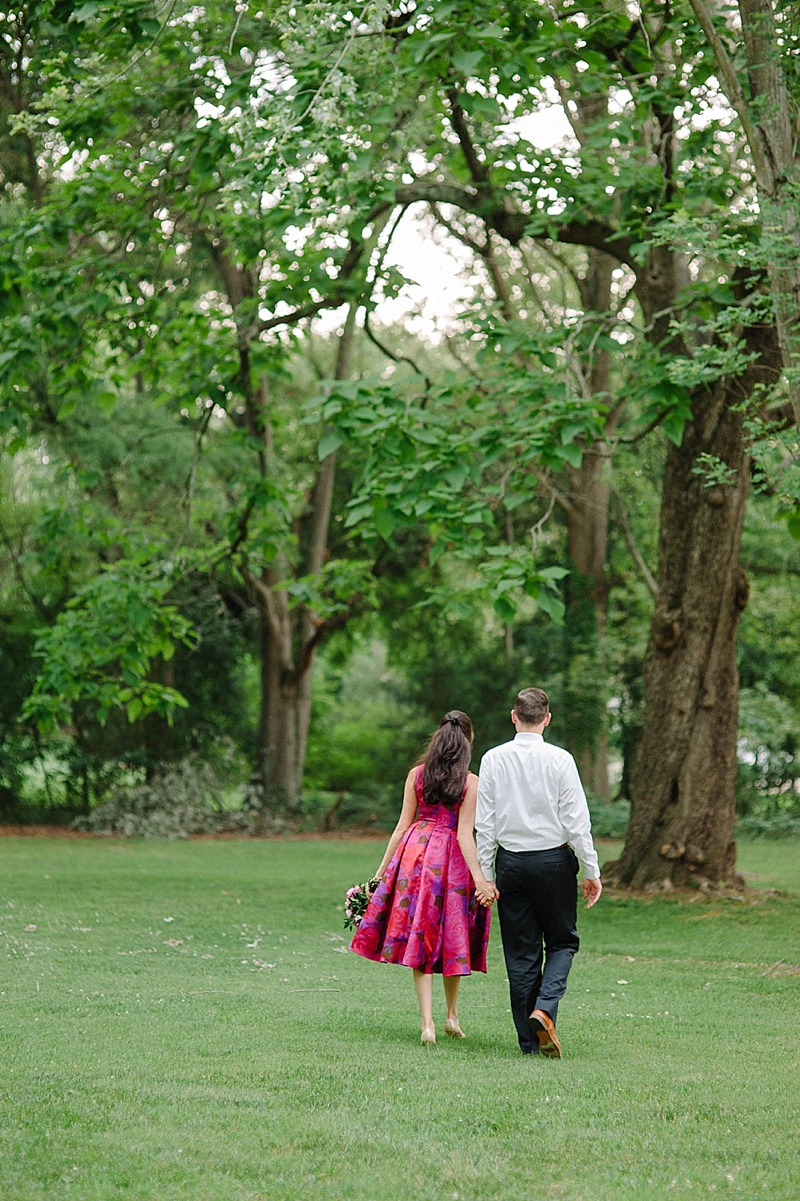 Additional vendors (provided by the couple)